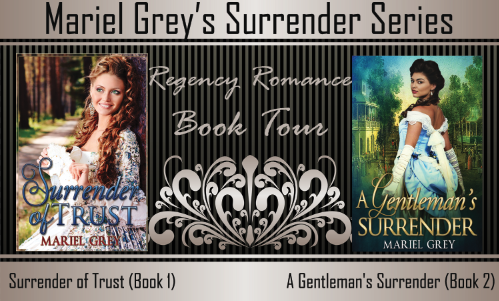 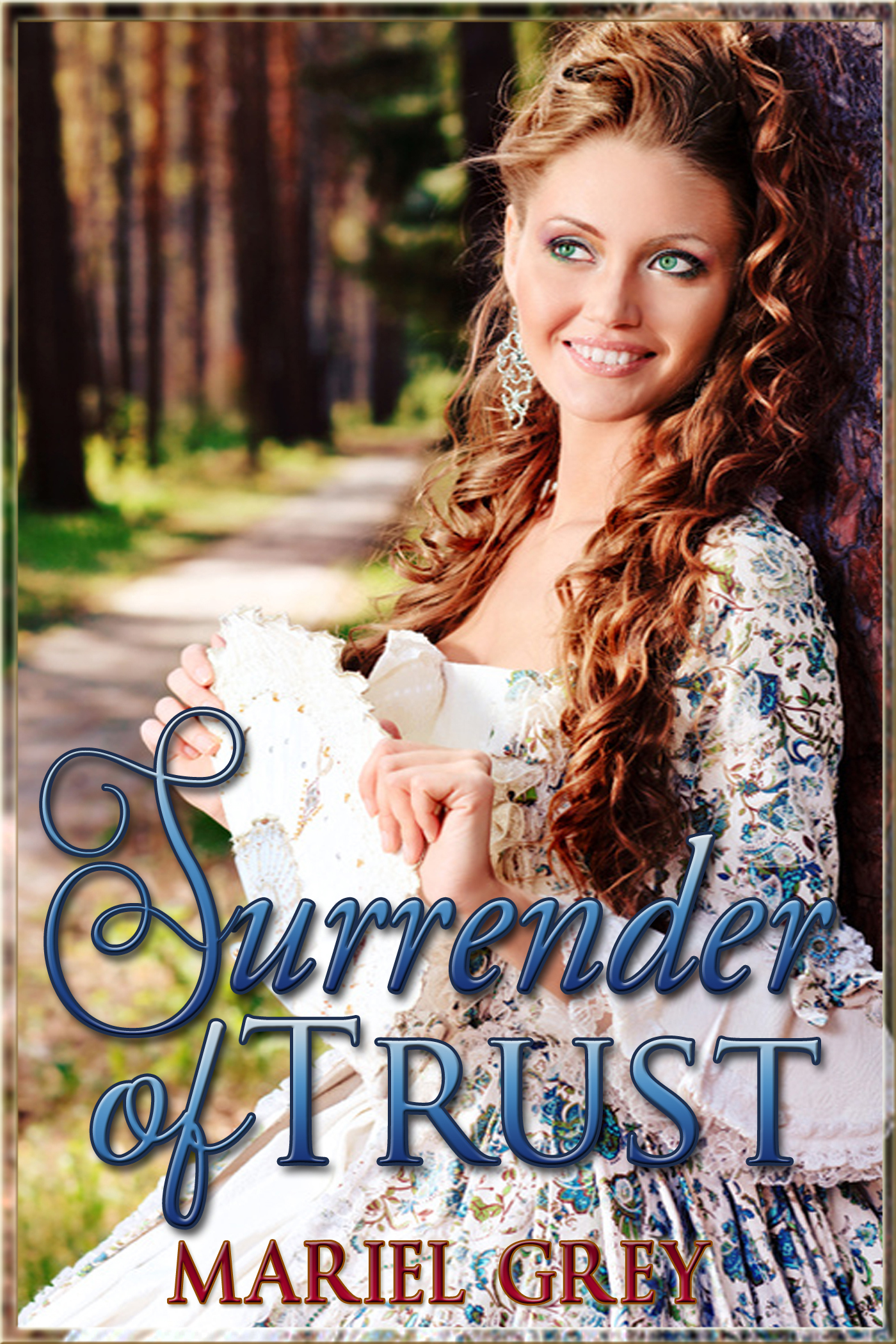 Surrender of Trust (Book 1)
Lucy Goodwin knows more about horse breeding than a proper young lady should. Her brother’s thoroughbred business has given her purpose and independence, but when an accident leaves her solely in charge, despair and destruction threaten her every move. Trapped in an impossible position, Lucy must do the right thing and watch their dreams crumble, or save their livelihood at a cost too great to bear.
Lord Philip Lyton, Marquess of Chalifour is a member of the prestigious Jockey Club, dedicated to eliminating cheating in horse racing. Trouble raises its ugly head when his business partner falls foul of an accident and he’s suddenly forced to deal with the man’s sister, who seems alarmingly out of her depth. Chalifour respects Lucy’s steely resolve, but knows that single-mindedness can be the most dangerous trait of all.
She might be beautiful and beguiling, but Lucy Goodwin is keeping secrets and Chalifour is determined to find out what they are.
Can be read as a stand-alone read. 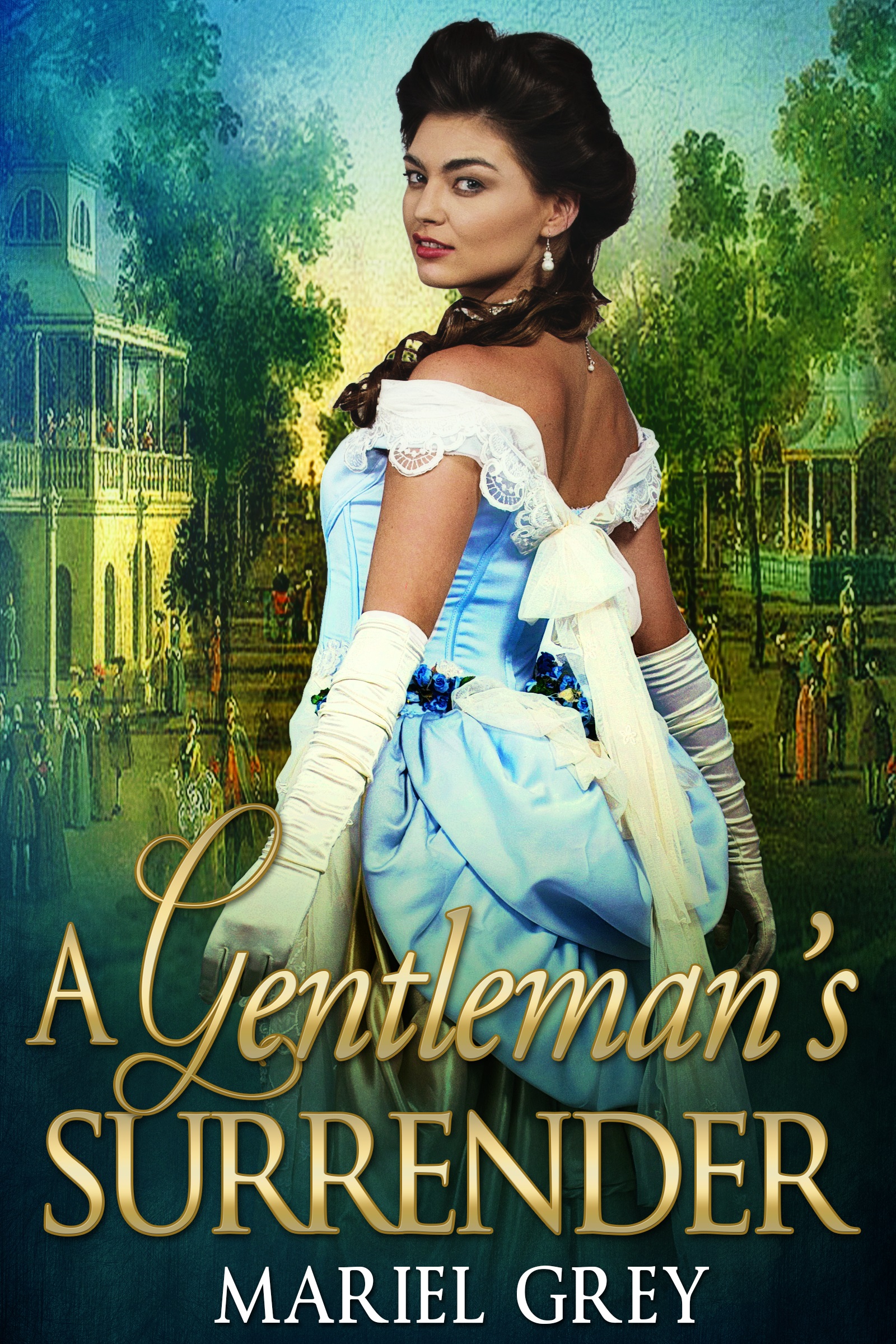 A Gentleman’s Surrender (Book 2)
Call her a romantic–or a fool, Lady Monique Cathdon is determined to marry for love. After watching her parents tolerate an arranged betrothal, life seems too short to be wasted on keeping up appearances.
After all, what’s the point of having a heart if one refuses to follow it?
With a smile the devil himself might be proud of, James Stanton is not what her mother would call a matrimonial prospect. Still, there’s something about the young man that sends Lady Monique’s heart thumping around her chest, and silences her voice of reason.
Unfortunately for Lady Monique, the stakes are high, and young ladies of the ton make for very poor gamblers. Especially when James Stanton is on the hunt for revenge, and won’t let an innocent woman–or his own passionate desires–get in the way of righting past wrongs.
Can be read as a stand-alone read. 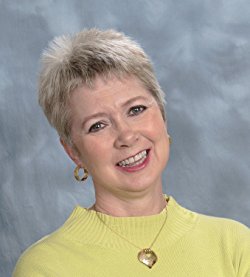 From the moment she could put pen to paper, Mariel Grey knew she wanted to be a writer. Like all good adventures however, it didn’t happen overnight; it was after several decades of working in litigation that the desire to create dramatic worlds and characters became too great to ignore. Her first foray into historical romance, Surrender of Trust, explored the grime and glamour of regency horse racing, following the determined but impoverished Lucy Goodwin and upright Lord Chalifour. Her second novel, A Gentleman’s Surrender, introduced the innocent Lady Monique and tortured Mr. Stanton, both struggling to find love in a world filled with deceit.
Though entirely at home in the ballrooms and street alleys of London past, Mariel Grey is currently working on a contemporary story set in Florida, a landscape dear to the author’s heart. When she isn’t conjuring words on her computer screen, Grey can be found on the water fishing, snorkeling, and enjoying the incredible natural beauty of her home.
Mariel has a wonderful husband (the hero of her own romantic story) as well as two mischievous rescue kittens (who are quite happy to play the role of villains). In addition to being a dutiful wife and animal wrangler, Mariel is a member of the Romance Writers of America and affiliated chapter of the Ancient City Romance Authors.

“Sign up to my newsletter here for bonus content!”
Get a peek at the Surrender world narrated by Mariel Grey 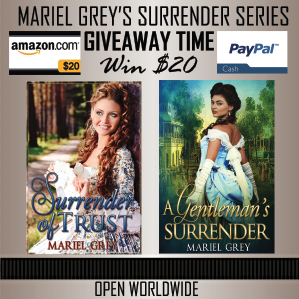 I have become a huge fan of John W Mefford. His writing style is simply fascinating. He has a knack for keeping you in suspense and wanting to read more of his work.
In this novel Ivy Nash is a compassionate and determined Special Investigator for Child Protective Services. She advocates for these kids because she herself had been in foster care as a kid.
When a 10 year old child admits to killing his foster brother, Ivy does not believe it. Her gut instinct tells her something is amiss with this case. As Ivy and her partner dig deeper into the foster family, they are left with more questions. Their persistence in solving this crime will keep you intrigued as you read the novel.

I highly recommend the novels by John W Mefford.

Disclaimer:
I was provided with an e-copy of this book for my review. Opinion expressed is my own.

NEW RELEASE….
Author John W. Mefford introduces Ivy Nash in the second series of the Redemption Thriller Collection.
A volatile hostage situation at a foster home reaches a bitter end: shots are fired, some die, some live to tell a sordid tale. In the midst of the anguish and confusion is one child who will bear the scars of this unbelievable turmoil.
As a special investigator for Child Protective Services, Ivy Nash lives by one rule: she’ll do anything to fight for the well-being of children. Anything. Something that was never done for her. As a “system” kid, she spent time in seventeen foster homes. Seventeen.
Very quickly, the facts of the case are blurred…accusations of sibling abuse, connections to drugs. Nothing lines up, and authorities want it all to go away. Their target? A ten-year-old boy. Unrelenting in her pursuit to find the truth, Ivy and her new friend Cristina uncover alarming new information to pinpoint who is at the root of the crime.
But evil knows no boundaries. Shock waves of her most horrific childhood memories erupt into the present, and Ivy knows that she’s in the fight for her life.
Part of the Redemption Thriller Collection which includes the Alex Troutt Thrillers and the upcoming Ivy Nash Thrillers. While all of the novels can be read as a stand-alone, there is a connecting thread in the Redemption Thriller books that will be unveiled over time. For a more fulfilling reading experience, books should be read in order: Alex Troutt, and then Ivy Nash. More series will be added into the collection within the next year.

“Rife with deceit and deception and characters that leap off the page, this story is told with confidence through a sure hand, engaging both the mind and the heart. A compelling treat.” — Steve Berry, New York Times Bestselling Author

Coming soon….
IN Pursuit
IN Doubt
Break IN
IN Control
IN The End

A veteran of the corporate wars, former journalist, and true studier of human and social behavior, best-selling author John W. Mefford has been writing novels since he first entered the work force twenty-five years ago, although he never put words on paper until late 2009.

John writes novels full of intrigue, suspense, and thrills, but they also evoke an emotional connection with the characters.
When he’s not writing, he chases three kids around, slaves away in the yard, reads, takes in as many sports as time allows, watches all sorts of movies, and continues to make mental notes of people and societies across the land.
John lives in Frisco, Texas with his beautiful wife, three opinionated kids, and a feisty fat cat who rules the world.